Paris, 13 June 2016 – PHOTONIS has been awarded the 2016 GICAT Export Trophy during Eurosatory, Europe’s largest bi-annual International Defence and Security exhibition for Land & Air Solutions. The prize was awarded to PHOTONIS based on the company’s successful implementation of a digital day-to-night sensor in world’s first 24/7 digital hand held, stand alone or clip-on weapon sight – CNOD (CMOS Night Observation Device). CNOD is developed in partnership with Rochester Precision Optics and has successfully been sold to the US Army.

CNOD is a high definition weapon sight that enables its operator to see in the day (bright sun) as well as low light (night) with high contrast and high resolution. A fully digital solution, the CNOD can record images and video for detection, recognition and identification of targets. The weapon sight combines three systems into one, at a fraction of the cost of similar systems currently on the market.
On receipt of the GICAT Export Trophy, Jerome Cerisier, Deputy CEO of PHOTONIS Technologies S.A.S. said: “We are proud to receive this recognition. Innovation is at the core of our business and fuels our international success. We remain grateful for the support of DGA, GICAT, the French armed forces and more generally of the French Government. As leaders of Night Vision technology, we are proud to represent 15% of the French Optronics Exports”.
PHOTONIS was approached by RPO based on earlier success in developing the patented KAMELEON sensor, for which it received the General Chanson award in 2015.  The co-operation resulted in the successful launch and sales to the US Army of CNOD.
Award-winning KAMELEON technology and CNOD success has led to the development of a French-only Night Vision Innovation & Technology Group, where high-tech participants have worked closely together to combine sensor technology, and system integration into smarter end-user applications. Examples include FusionSight and PeriSight by Bertin Technologies - powered by PHOTONIS, and situational awareness camera applications developed in cooperation with Optsys. These projects provide innovative optronic solutions for Land Systems Vehicles for advanced projects such as Scorpion.
PHOTONIS’ patented KAMELEON sensor technology, Bertin Technologies FusionSight and PeriSight as well as the Optsee are all on display and available for demonstration at the PHOTONIS booth in Hall 6, Stand J80
during Eurosatory. 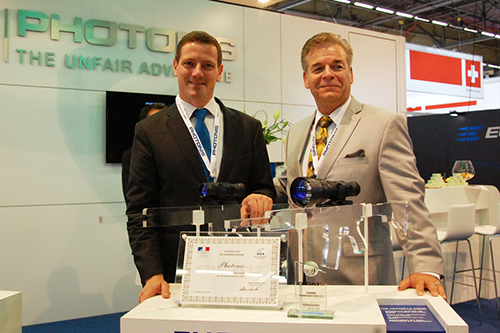 Photonis on a tour with BFST